The last two months have been one of travel backwards and forwards to Waihi and beyond - time spent with family and friends. Driving past the Pumphouse at Waihi has been a constant reminder as past photos and information  is sorted over the holiday break. Recording family history has threaded the story once more of the early days of the one of the giant mining companies of all - Waihi Gold Mining Company.
The remains of the Pumphouse seen today and the concrete relics of Victoria Battery at Waikino are reminders of that early era 1887 to 1905. A period  when the Directors and heads of a Mining Company dared to dream, plan and implement those plans into something that became one of the biggest Industrial Plants in Australasia. ﻿﻿﻿
﻿

Much has been written about the Waihi Strike in 1912, the lives of those working in the mine, Thomas Russell as Chairman of Directors of the Waihi Goldmining Company. However for some of the others also involved, their names and stories are scattered and some almost forgotten.
Exploration, Acquisition, Flotation and Company Beginnings:
Back in 1887 the Waikato times reported a visit to Waihi Mines by those connected with the Union Mine Waihi - including Hon Thomas Russell,  Messrs J. B. Russell, Henry Russell, Thomas Morrin, and J. W. Walker.


The intention was to float the Union Mine on the English Market as soon as possible.    By the end of 1887 it was reported that Union and Rosemont Mines were floated under names  of Waihi Gold Mining Company Ltd. Waihi Gold Mining Company Ltd was  registered in London in December, 1887, with  capital of £100,000 in £1 shares.  The New Zealand Herald ( 25/01/1888 )reported that the following were Directors of this newly floated Company: -


﻿  Edinburgh born Sir Edward Stafford had also formerly been the third  premier and on three occasions between 1856 and 1872, of what was known in those days , the Colony of New Zealand.﻿﻿﻿﻿﻿﻿﻿

Thomas Russell in the chair at a meeting of the Waihi Gold Mining Company in May 1888 reported  that  shares allotted were 84,818 out of 100,000, and the remainder being gradually taken up.  By 1889 Thomas Henry Russell ( son of Thomas Russell) based at Waihi  was Superintendent of the Waihi Gold Mining Company, J.W. Walker ( John Watson Walker more well  known as "Long Drive Walker") the Mine Manager and Seymour Thorne George as the company's first General Manager based in Auckland.

Also in 1890 Robert Rose was appointed second General Manager of Waihi Gold Mining Company Ltd. In addition to being part of the era of capital growth and development for the Waihi Goldmining Company,  Rose was also a Director of NZI ( New Zealand Insurance Company ) from 1889 until his death in 1900; Director of the growing Northern Steam Ship Company 1999 to 1900 - a company Rose had been involved with since its formation in 1881 and Secretary of the NZ Mines Trust. His sudden death was a shock to many including those in Waihi and a loss to the company of who was someone known for level headed decision-making.
﻿﻿﻿﻿﻿
﻿﻿Capital Growth and Development


This era saw increase of capital, major construction - the outcome of adoption of a new process , and changes in personnel at the helm of the company because of deaths.


Henry Dale was appointed second Superintendent and Manager  of Mine and Plant in the place of T.H. Russell in 1890, following the purchase and sale of the Martha Mine.


The year 1891 marked another significant  Waihi Gold Mining Co. Ltd increase their capital by the issue of 50,000 new shares, raising the total to £150,000.
Also in this year Mr. Hubert Percy Barry was bought into the Company and by 1892 had become Superintendent - replacing Henry Dale and Mr. Thomas Gilmour also bought into the Company in 1891, was appointed Mine Manager of the Waihi Mine. Both were active in  community affairs, including establishment of Waihi Hospital and Waihi School of Mines. Barry was Chairman of the Ohinemuri District Council for a number of years and Gilmour, Mayor of Waihi for a term from 1904, just after his retirement from Waihi Gold Mining Company.
﻿﻿
July 1894 marked another significant milestone for the Waihi Gold Mining Company when they adopted the cyanide process for gold extraction. By 1896 plans for major works were being outlined at the statutory meeting and in 1898  Victoria Battery construction had begun at Waikino.
﻿
﻿
During this decade those who were at the helm of the Company and died were :
By 1896 the Organisational Structure of the Waihi Gold Mining Company Ltd looked like this:- 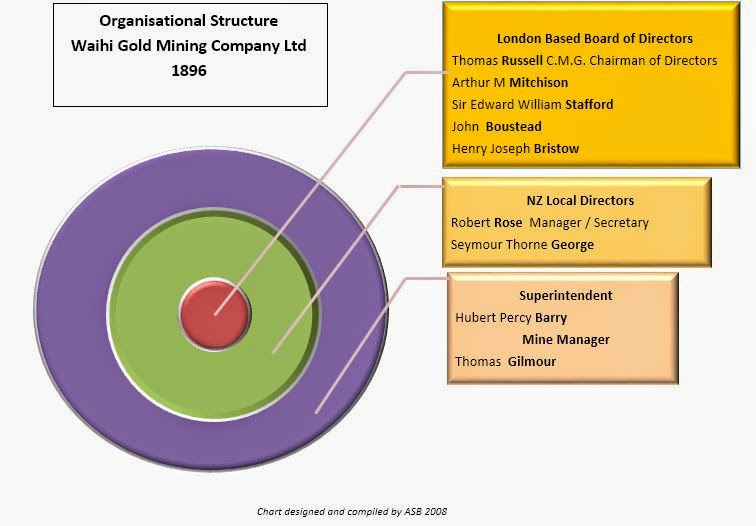 Charles Rhodes was appointed replacement  to  the position held by Robert Rose in 1900 . This was to be a long tenure with the Company until Rhodes died in 1932. Rhodes was as with several others at the helm of Waihi Gold Mining Company, on the Directorship of NZI ( New Zealand Insurance Company), Northern Steam Ship Company, NZ Mines Trust , NZ Portland Cement Company.
and Auckland Electric Tramways Company Ltd. Rhodes took a keen and active  interest in the introduction of Rotary Clubs to New Zealand and along with Fowlds is known as one of the Founders of this movement.
In April 1904   - New directors to Waihi Gold Mining Company Ltd were appointed  - Messrs Beddington, Brutton ( AKA Button )  and Owen  making seven directors instead of five  - Thomas Russell CMG  Chairman , Arthur M Mitchison,  J Boustead  Henry J Bristow,  H. E. Beddington,  P. Berry Owen, E J Brutton.

Less than six months later the  Chairman of Directors died 2 September 1904 - ending a significant influence and era for this company. His brother James Russell ( formerly  of the legal firm, Jackson and Russell ) was at the helm as Chairman  for but a few short months when he too died. Arthur Mitchison - son- in-law of Thomas Russell was voted to the chair and so started a new era of management.
In 1905 the Organisational Structure of the Waihi Gold Mining Company Ltd looked like this - back to a Directorship of five :- 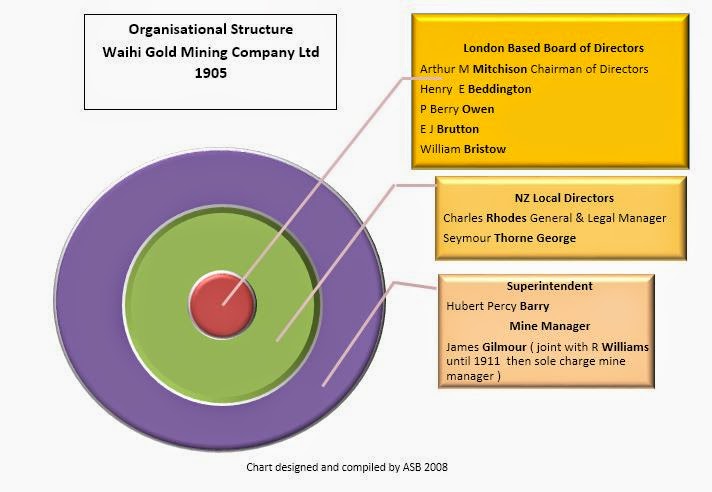