29 September 2015 Today John Key ( Prime Minister of New Zealand ) announced plans for the Kermadec Trench to become an  Ocean Sanctuary. Several weeks ago we returned from a Tongan Holiday which included whale watching - Humpback whales who migrate from their Antarctic summer feeding areas warmer tropical waters such as Tonga for Winter calving. They travel long distances up largely  the Eastern Coast of New Zealand and through Cook Strait and along the West Coast. Following calving they return with their young to the Antarctic via along largely the West Coast of  New Zealand.
The Kermadec from North Island New Zealand to Tonga provide a migratory corridor for humpback whales. The Kermadec Trench one of the planet Earth's  deepest trenches and its continuation - the Tongan Trench with its subduction is home to many fish, turtles and mammals such as Humpback Whale. From time way back and in the history of settlement in New Zealand they have been part of the many stories passed down.


Anyway on with this Humpback Whale tale.  Saw Tom at the Supermarket after our return from Tongs.  Now Tom is a very keen fisherman off the shores of Coromandel's Eastern Seaboard. On hearing of our fortune seeing Humpback Whales with Deep Blue Diving in Tonga, Tom shared a sighting when fishing a couple of months ago, of a Humpback whale close to Whangamata Shores. Don't know whether this was one of those we saw at Tonga. However for the three of us it  recalled recent past history memories.
A dead Humpback Whale being washed up on the Whangamata's Main  Surf Beach back in December 2011. There was another whale stranding on the South Beach, Whangamata back in the late 1990's near Hinemoa Street. Both the whales from these events were buried where found. Likewise for those that did not survive in the large pilot whale stranding further up the coast from Whangamata at Ohui near Opoutere in 2004. I remember that stranding very well and the joy felt when the surviving whale took the encouraging help and headed back out to sea on their journey towards Tuhua ( Mayor Island).
Another such Humpback  was reported stranded and washed up on the Kapiti Coast at Waikanae Beach  in October 2014. Since people settlement on the coasts of New Zealand, strandings, wash ups or presence of large sea creatures such as whales, dolphins and sea elephants has always attracted great interest. In July 2014 a Humpback Whale visited   Reotahi reserve in Whangarei Harbour feeding on sprats - typical of Humpback for keeping close to the shoreline on their migratory route they feed on small fish, krill and plankton.
Looking back in New Zealand's  papers online - Papers Past  New Zealand National Library one can find a number of articles on Humpback Whales.


Gone in recent times of New Zealand's past history  are the days of whalers and sealers who plied these coasts. Now it is people like us whale watching and in event of stranding or being washed up, community taking care of these whales.
Posted by Anne Stewart Ball at 22:46:00 No comments:

Ponui Passage Lighthouse A Screw pile light, this was the other of the two sea wave - washed lighthouses that James Stewart , Civil Engineer, was involved with in design and superintending construction. The location of this lighthouse was on a flattish table bank of a sandbank known as “sandspit” to shipping which travelled to and from Thames in the Hauraki Gulf and Auckland on the Waitemata Harbour.
﻿
Determining the position, Stewart, just as with Bean Rock Lighthouse, enlisted the expertise of Captain Burgess, Chief Harbour-master, Auckland, before and during construction, with careful soundings being made to determine the geological composition of the sandspit. Imbedded timber at the bottom of the sandspit was a fear when screwing down the piles.
Mr. Heron’s (of Shortland) tender of £2,300 was the successful one for the construction of the Sandspit Lighthouse in the Ponui Passage. William Hammond ( AKA Toss ) in an article in the Ohinemuri Journal, writes of his father and Messrs Flatt, Heron, Morton, Craigie building this lighthouse.( Hammond, 1964)
Reading the description of the labour required to complete construction of the lighthouse in various articles and Stewart's own paper to the Auckland Institute reads like heavy labour ( none of the construction technology that is available today in 2014).


To effect the screwing down of the cast iron piles with a capstan, a temporary platform was built. The Daily Southern Cross reported the following on the method:


…”The plan adopted was to prepare long poles with a peculiar kind of screw thread, and screw them into the ground. The thread of the screw began at the point with nothing, and increased to l4 in. This, its greatest width, was attained in two and a-half turns, and then one full turn was given after it had attained that distance in the solid. The power to screw them down was applied by men with a capstan….” AUCKLAND INSTITUTE. Daily Southern Cross, Vol. 29 August 1871, P 3
Stewart estimated that the total weight of the lighthouse structure was about 60 tons and wrote that:-
….” The interiors of the piles are filled with good cement mortar, to preserve the iron from rust, and the heads and nuts of the joint bolts are imbedded in the same. Tubular cast iron braces, and the lower timber frame, three feet above high water, complete the foundation which has answered all expectations in the recent exceptionally stormy season…” ( J Stewart,1871)


Stewart was to write and read a paper to the Auckland Institute on the foundations of the lighthouse in Ponui Passage.  In this, he described the determining of a suitable site with Captain Burgess, Chief Harbour Master and screwing down the piles with the aid of a capstan and winch handles worked by four men.
Both Bean Rock and the lighthouse at Sandspit in the Ponui Passage were completed in 1871, Messrs Fraser & Tinne having provided the ironwork. Both lighthouses were completed with a hexagonal shaped wooden tower which formed a cottage and storeroom for the Light house keeper.
One of the first lighthouse keepers at Ponui Passage lighthouse, or Sandspit as it sometimes was known, was Daniel Macfarlane ( Archives NZ, ACFM 8180 46 870/76). MacFarlane - in some records spelled McFarland or McFarlane – common variance with this surname) was followed by Charles H.O. Robson as Principal Light house keeper and then John Marsh. 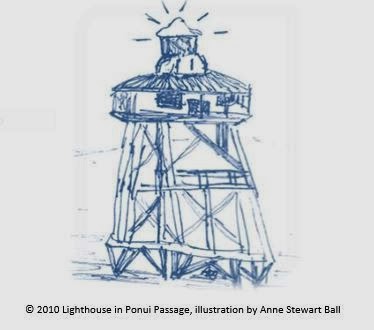 In those days before automation, lighthouses were manned by Lighthouse Keepers. One of the responsibilities was to keep the lights going for what had become a busy route with “coasters” – steamers and sailing ships plying with cargo and passengers.
The early years of operation of this lighthouse saw two collisions nearby – that of the cutter “Avon” with the steamer “Golden Crown” in December 1871  and in July 1877 the ketch “Adah” with the “Southern Cross.”

From newspaper accounts in later years, it would appear that in November 1896, some damage was done to this lighthouse. Evidently the schooner Huon Belle, owned by J.J. Craig was reported to have run aground against the lighthouse causing damage to two of the iron piles and the lamp glasses. The Huon Belle had been purchased by Joseph J Craig  to carry Portland Cement from Whangarei to Coromandel Peninsula for the new industrial mine batteries being constructed.
﻿
﻿
﻿
From Tararu, Thames, NZ looking toward coast near Ponui Passage in March 2010, CRB photo collection
Reference Source:﻿