The years 1860 to 1886 saw a number of other influences upon shipping in the Pacific. The movements of troops from Australia and England in the New Zealand Wars. The continued discovery of gold including Otago, Thames and West Coast in New Zealand. Sail giving place to steam. The need for coal to propel these " new fangled " steamers. Coals from Newcastle ( literally) and the provision of coal hulks in harbours.

New, New Zealand shipping companies ( with their fleets of steamers ) that formed and too - grew large serving coastwise and cross seas - bringing cargoes and immigrants to New Zealand and other shores so these steamers could "top up" fuel. The New Zealand Vogel Public Works Department Immigration Scheme

New,  New Zealand shipping companies ( with their fleets of steamers ) that formed and too - grew large serving coastwise and cross seas - bringing cargoes and immigrants to New Zealand and other shores. Henderson & Macfarlane, even though a merchant shipping line, were to gain a fair share of the immigrant passage. The Company's Circular Saw Flag being looked for.


1873  The New Zealand Shipping Company inaugurated at Christchurch and commenced trading with 18 ships, including those under charter.


1881 The Northern Union Steamship Company was formed out of several companies and was to become a “ lifeline” New Zealand coastwise.

This era saw the fine, fast clipper barque - Alice Cameron added to the Circular Saw Line. The same year - 1862 saw the launch of the 376 ton barque Novelty, from the Auckland Shipyards of well known and respected H Niccol.

In 1865, Henderson & Macfarlane acquired the brig Pakeha built in Nova Scotia in 1963. It was the brig Pakeha who bought the Nova Scotian immigrants to Auckland in 1864 - amongst the passengers were newly married Lemuel Bagnall who in early days of settlement went into shipbuilding with Darragh. Lemuel Bagnall then went on to timber milling, agricultural and horticultural interests, along with shipping - settling at Turua on the banks of the Waihou River opposite Thames.

"On Tuesday and Wednesday the flags of the various vessels in harbour were flown half-mast, in respect to the memory of Mrs. Thomas Henderson, wife of Mr. Henderson, of the firm of Henderson and Macfarlane, and owners of the famous fleet of Circular Saw Liners, and the two clippers Novelty and Alice Cameron, (of that line) now in harbour, have also been painted in mourning."
Shipping Intelligence. New Zealand Herald, 1 April 1867, Page 7

This was the era of other steam ship companies forming providing strong competition for survival. Following the liquidation of the Panama Steamship Company, Henderson & Macfarlane acquired Claud Hamilton, Phoebe, Lord Ashley and Airedale With the exception - shipwrecked Airedale near New Plymouth in 1871 bound for Taranaki and Southern Ports from Manukau.

1871 saw Gustav Von der Heyde  chairing a meeting of the Shotover No 1 Gold Mining Company of Thames.  ( New Zealand Herald,30 January 1871, P 2 )  The Thames Goldfields, opened in 1867 drew many to the area and a number of gold mining companies were formed.

In December 1880 the Observer reported the engagement to be married of Miss Maggie Macffarlane, younger daughter of Mr. Thomas Macfarlane, to Mr. David Mills, manager of the Wellington branch of the Union Steamship Co. ( SOCIETY Observer, 18 December 1880, Page 124) 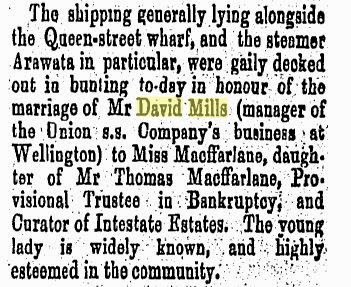 12 August 1882 bought another change when Thomas Henderson snr. disposed of the business Henderson & Macfarlane to his son Henry William Henderson and retired.

1882 - 1886 Era of Henry William Henderson. Still operating under company Henderson & Macfarlane
Thomas Macffarlane died 10 May 1885 - the outcome of a railway accident. (Thames Star,  11 May 1885, Page 2) Having given up his position in Henderson & Macfarlane in 1870, Macffarlane had contributed and was respected for work as
Director of the Auckland Gas Company, Curator of Intestate Estates, a Visiting Justice of the Gaol and Asylum, the Acclimatisation Society, and Auckland Lawn Tennis Club, and the Bowling Club where he was President.

Just over a year later his former business partner in Henderson and Macfarlane, Circular Saw Line - Thomas Henderson Snr. - died after illness on 27 June 1886 in Wellington. True to tradition flags of various vessels in Auckland Harbour were at half mast as a token of respect. For Henderson who with his partners started and built up from nothing the Circular Saw Line.

Another new era for his sons and Henderson & Macfarlane - traders and shippers. Also an era where steam surpasses sail and vessels become larger.