Queen of Beauty Mine Thames NZ 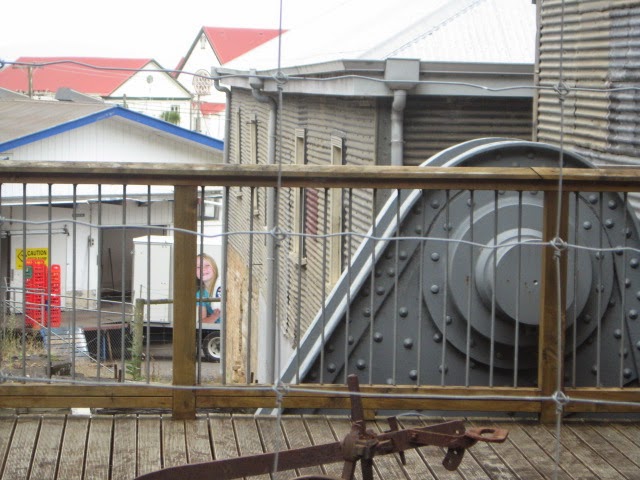 Behind what has become known as Bella Street Pumphouse on the corner of Bella and Cochrane Streets, Thames is a sign - Thames Hauraki Pumping Plant. According to this sign in 2012, this pumping plant was built on the site of the Queen of Beauty Mine.

Two days after the opening of plant and railway, some Thames people also saw the installation of the newly elected, " Parawai School Thames " educated" and said to be the youngest Mayor of Thames to date - Henry James Greenslade.


Greenslade had attended both openings of plant and railway and was presented with a piece in casket  of the original railway first sod turned back in December 1878.

As to Thames Hauraki Company pumping plant - a new era for this mining area began with its opening and that is another story.


Queen of Beauty Mine of which the pumping plant used the deep shaft for its operations was a very relevant part of the past history of the Thames Goldfields. Mining in the location began when Thames Goldfields opened in 1867. In  those days it was known as the mining claims of Queen of Sheba and Mount Macedon.

" City or London, G.G., Queen of Sheba, and Knight of Gwynne Claims.—That which has been accomplished by the shareholders of the City of London Claim constituted an excellent precedent for the guidance of miners in other parts of the field, but especially in connection with the working of the country in the immediate neighbourhood of the City of London ground, , which, is situated at the mouth of the Waiokaraka Creek, and adjoins the old and long worked Queen of Sheba, or, to give it its new name, the Queen of Beauty Claim."
Daily Southern Cross,10 November 1870, Page 3


Many of the mine claims had shares on the open market in these days. Scrip Corner, Thames, became a famous spot as stock brokers sought to “make a killing” and those buying, sought to be part of making a great fortune. Business was brisk as scrip changed hands.

However for Queen of Beauty, unlike many of the other claims, was worked by the seven Shareholders William Thomas, William Barker, Ronald McDonald, James Stewart, James McCabe, John McCabe, Patrick Walsh. It appears from an article in the Daily Southern Cross, that one - William Tonks - was also a shareholder. (SUPREME COURT.—Monday. CIVIL SITTINGS. Daily Southern Cross,22 April 1873,P3)

The Goldfields Report to the House of Representatives in 1874 reported the following on the Queen of Beauty Goldmine “The Queen of Beauty mine is still worked as a claim, and has continued to pay the shareholders handsomely, at the rate of about £200 per month to each man.” ( AJHR 1874 I H-09)

During the years 1874 Queen of Beauty Mine along with neighbouring mines of the Waiokaraka were dogged by drainage problems, some of them stemming from the neighbouring Bright Smile Mine. The first half of the 1870’s saw the formation of the Thames Pumping Association and the Waiokaraka Drainage Association to address the problems of water seepage in the  number of  mines. ( amongst them - The City of London, Queen of Beauty, Bird in Hand, Queen of the May, Queen of the Thames, City of York and the Exchange).
However by October 1875, Bright Smile had overextended itself a little in the flurry of new pumps, a new 40 stamper battery, still the water problem and ceased operations. (Thames Star, 01/10/1875:p2). There followed the usual creditors meetings for Bright Smile and eventually new owners of a new company formed.

There were other problems for Queen of Beauty Owners - serious injury which began with that of Richard Watson, crushing supervisor, who lost his life in the Kuranui Boiler Disaster at the beginning of 1874. The accidents and injuries continued and saw Robert Fox lose his life in March 1875. An interesting statement from the miners of the Queen of Beauty Mine, expressing support for the Manager Charles Wilson and for the safety of this mine appeared in the Thames Advertiser at the same time as the Inquiry Result into the accident.
( INQUEST ON ROBERT FOX. Thames Advertiser, 17 March 1875, P 3 )

September 1876 saw a change of management for Queen of Beauty Mine when application was made to register the Queen of Beauty Mining Company as a Limited company. There were the additions of two new shareholders - William Francis Buckland and John Channing Buckland.

In that first era for Queen of Beauty Mine from 1870 until 1885 when disaster once more fell and the shareholders decided to stop operations there were the men who worked the mine as managers and drew those lucrative yields from the claim: -

Note: There was also a Queen of Beauty Mine at Waiorongomai and at Waitekauri.