Charles Ring  arrived in New Zealand  about  1841  from Tasmania , Australia, setting up farms  running sheep, near Onehunga Auckland.( Hayrs and Pa),  The 500 sheep, Charles was said to have purchased from Mr. Busby of Waitangi.  He headed  across Tasmanian Sea waters again to New South Wales, Australia ,to add cattle to his livestock.  During these years Charles was joined by his brother Frederick Ring. The two full cargoes  of cattle were sold as pastoral land was not easily available at this time. Worldwide,  gold discovery was resulting in  " gold rushes" to  San Francisco . The Ring brothers obtained passage aboard the brig Fanny  and voyaged  to the Californian Goldfields.  With goldmining and shipwreck over the next several years these two known as '49ers experienced several  adventures which have been well documented in newspapers of the nineteenth century.
On return to New Zealand in 1852 they headed for the hills of the Coromandel Ranges, searching for that elusive gold. Charles Ring has been attributed with the finding of the first gold by a European Settler at Driving Creek, Kapanga, Coromandel, New Zealand .Various accounts of this  have been recorded during past years of our  NZ history.

William Charles Ring, father of William Charles Ring, eldest son, was to settle at Hinuera near Matamata in the 1880's.   A reporter visiting the Patetere Country  in 1883, wrote about Ring's 1000 acres :-
" The land appeared to be of a somewhat similar character to that higher up the valley, though possibly not quite so light, but there was no reason to doubt that what has been accomplished on the Auckland Agricultural Company's estates there, at Messrs. Ring's and Walker's farms, and at Mangawhero, can, with the exercise of similar industry, skill and capital, be repeated in scores of cases, throughout the Thames Valley and the Patetere country." ( NZ Herald 10/10/1883)

This area in those early 1800's was being bought in. By December 1880 a suitable dray track of approximately 20 miles had been constructed. Surveyors followed and by April 1881 a bridle track was completed to Rotorua. Construction on the Rotorua Railway - the first section - was begun in 1882 - Morrinsville to Lichfield.

William Charles Ring as well as being a farmer ( sheep and horses) was also a keen athlete and sportsperson. Ring was very keen on Football ( now called Rugby ) playing for Cambridge and Waikato. Football was fast becoming a popular game amongst those in rural areas of Auckland Province.  1883  saw Ring selected for the Auckland Representative  Football team which played against Christchurch at Christchurch. 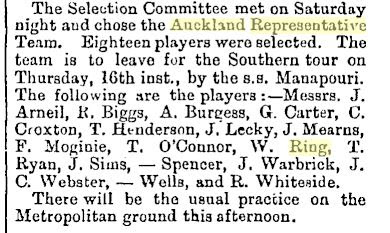 The reporter writing in the Observer wrote:-

"W. Ring (Waikato) : A grand runner, and ex- champion of the Province. Plays half-back, where he picks up very clean and is going full  speed in the first five yards. Has developed into a dangerous fender, and knows tho game. Must  not play too much for himself, but remember to back up "Whiteside and pass to him in turn. Will get behind almost certainly, as he can run round any man he is ever likely to meet."( Observer 11/08/1883)

A search of the web found an article and photo of this team  on the NZ History Website -  Auckland rugby team, 1883

This William Charles Ring continued  farming until his death in 1932,also being involved in the community he lived in. A school was opened at Hinuera in 1892 and the children of William Charles and Mary Ring attended, being some of the first pupils.


Ring's  residence, not far from the Hinuera Railway Station,  housed the Hinuera Post Office and in 1902, daughter Ethel was postmistress.  He was a councillor on the Piako County Council , Patetere Riding, and in 1921 appointed a Justice of the Peace.

William Charles Ring born in 1882, the year the first section of the Rotorua Railway was begun, saw  formation years spent on his father's farm  at Hinuera.  One of nine siblings, there was one younger brother and seven sisters. This generation of the Ring family were to see   changes  from horse transport to motorised transport - a relevant change for William Charles who was to become a veterinarian. The other impacting upon the Ring and many other New Zealand families was what is now known as the First World War.  A newly qualified veterinarian, William Charles joined the NZ Veterinary Corps. 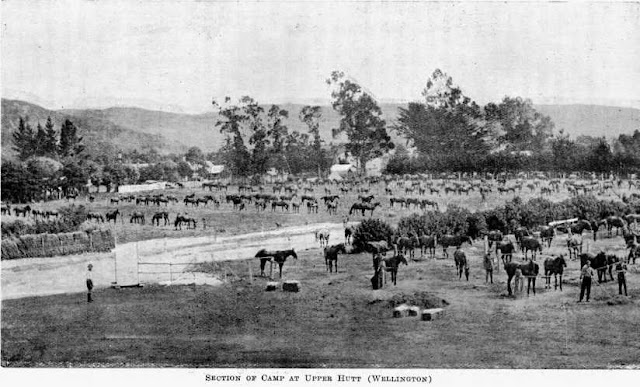 The first school Ring attended was Oxford ( Oxford now known as Tirau). In July 1992 it was a move to Hinuera School, the year this school  opened. Secondary Schooling was completed at  Auckland College and Grammar School. Seeking a career in veterinary medicine, Ring attended  the University of Pennsylvania gaining V.M.D. in 1911.


" Dr. William Charles Ring (Auckland) will sail on August 7 by the North German-Lloyd steamer, Scharnhorst, for Sydney, on his way home. He is returning to New Zealand from, the University of Pennsylvania, from which institution he recently graduated, Since arriving here he has been staying with Colonel Blenkinsop. of the NZ Royal Military College: of Surgeons. He should reach the Waikato at the beginning of October."  ( New Zealand Herald  28 /08/ 1911)

Ring was to return to University of Pennsylvania in 1929, attending a post graduate course and was impressed with United States advances made in  treatment of sterility in cows.

Captain  Ring returned from service in France July 1919 and was also to serve in the NZ Veterinary Corps 1941 - 1944 in the Second World War gaining the rank of Major and retired in June 1944.

1931 saw Ring Propriety Company Limited -  a company manufacturing and selling veterinary medicines and preparations - the shareholders being William Charles Ring, Monica Ring and Alan Rutherford Gorrie ( brother-in-law of William Charles Ring)
William Charles Ring, third generation living in the Auckland Province, died 10 August 1950 in Auckland . His occupational life of veterinarian was certainly one involved with horses throughout from the time qualified as a V.M.D.